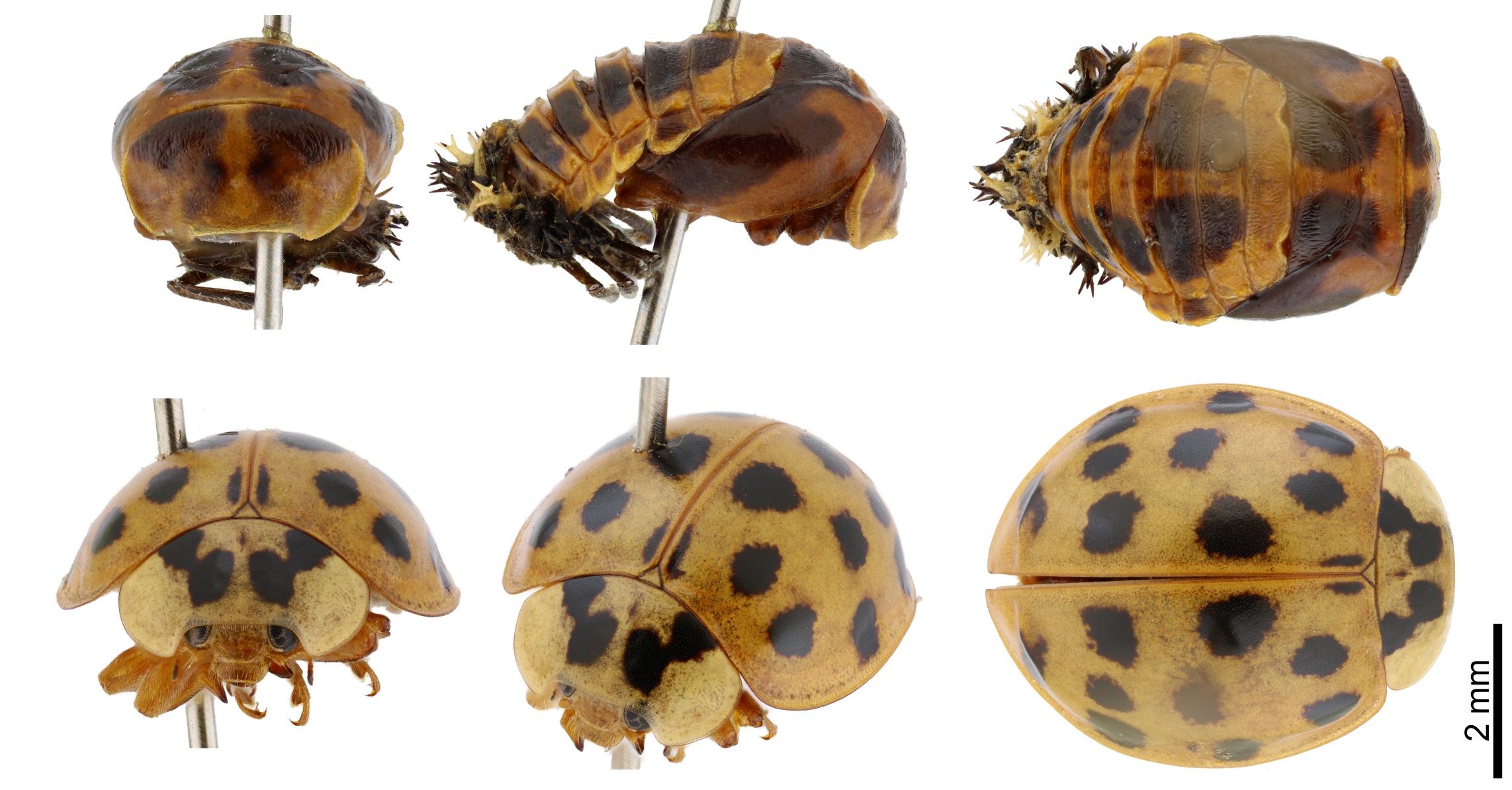 Already in the Middle Ages, it was considered a symbol of luck and diligence: the ladybird was already a lucky beetle and biological pest controller in one. For about 20 years, unfortunately, a species related to the ladybird has been appearing more and more frequently in our country. Our treasure of the month – the Asian ladybird – is considered an invasive species that threatens the native ecosystem. At the LIB site in Hamburg, the specimens serve as a basis for current research.

Humans brought it into the domestic ecosystem to use it as a biological weapon against aphid infestations on crops. The Asian ladybird Harmonia axyridis and its pupae in the collection of the entomological department at the LIB Hamburg site are among the first specimens of the globally invasive species to be found in Germany. Since 2002, they have been part of the “home collection of beetles” in Hamburg and have firmly established themselves here within just two decades. The Asian ladybird forms at least two generations per year – under good weather conditions even more.

More than 70 different species of ladybird are found in Germany. The most common are the seven-spotted and two-spotted ladybirds. They each have red wing covers with a total of seven or two spots. Our treasure, on the other hand, is found in more than 100 different variations – most frequently in an orange-red coloured variety that has 19 black dots. Due to its high reproduction rate, its aggressiveness towards other ladybird species and its resistance to many pathogens and parasites, it can have a damaging impact on local ecosystems. Nevertheless, in areas that have been colonised for a longer period of time, researchers have found that native species recover and reach old population levels after an initial very significant decimation by the invader.

The beetle collection at the LIB Hamburg site takes many specimens of this invasive species every year and is thus essential to understand the chronology of the beetle’s spread. Everyone can help and inform our researchers of new findings via the portal www.neobiota-hamburg.de. Dr. Martin Husemann was in charge of setting up this website to track introduced species and to assess whether they pose a threat to the ecosystem in Hamburg. In addition, useful information can be found here about already identified invasive species such as the mitten crab Eriocheir sinensis, the black-headed duck Oxyura jamaicensis, or the curly leaf snail Hygromia cinctella.