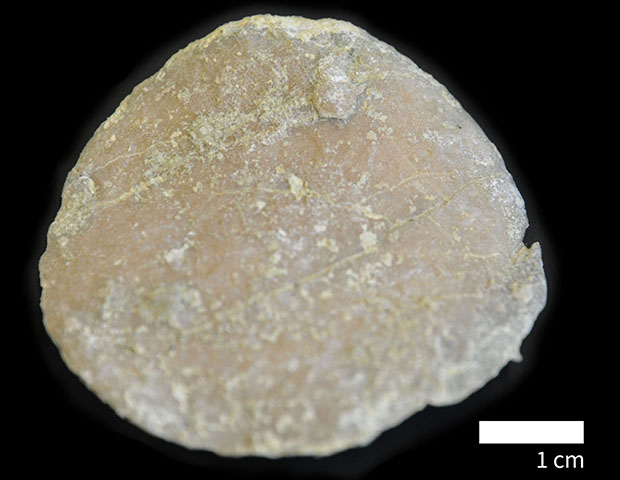 A magnificent specimen of its kind is our Treasure of the Month. The newcomer to the Geological-Palaeontological Collection is a large foraminifer (literally “hole carrier”) of the species Nummulites millecaput. The specimen is a fossil witness from the Eocene that writes climate history.

Foraminifera are predominantly tiny, single-celled organisms that form chamber-like shells. They somewhat resemble shells on the stand, but are not visible to the naked eye.

On average, they reach a size of 200 to 500 micrometres; our large foraminifera, on the other hand, measures an impressive almost 5 centimetres. The calcite shells of many species play a particularly important role in palaeontological research. As fossils, they can survive millions of years in good condition – just like our treasure.

Most species of foraminifera are adapted to certain environmental conditions. Researchers can thus use them for climate and ecosystem reconstructions. Chemical investigations that can be carried out on the shells allow additional conclusions to be drawn, for example, about the temperature of primeval seas. Foraminifera thus play a very important role in palaeoclimate reconstruction, as can be seen in the current special exhibition “Eocene – At the Beginning of Our World” in the Zoological Museum, Hamburg. Nummulites millecaput lived in the Eocene and is therefore a contemporary witness of the age the exhibition describes.

Large foraminifera like our treasure of the month are particularly fascinating because they reach an astonishing size for single-celled organisms. The genus Nummulites was formed around 66 million years ago. As fossils, they are found in large quantities in fossils of former shallow seas. An interesting example of this are the pyramids of Gizeh, which consist mainly of Nummulites rock. The large single-celled organisms have also found their way into the German-speaking world as “lens stones” and are the basis of several legends.

Some specimens of the species Nummulites millecaput were collected by Prof. Eva Pfeiffer (Institute of Soil Science UHH) during a field event in the area of Bad Adelholzen (Bavaria). A particularly splendid specimen has now been handed over by Prof. Gerhard Schmiedl (Institute of Geology UHH) to the taxonomic collection in the Geological-Palaeontological Museum of the LIB-Hamburg.