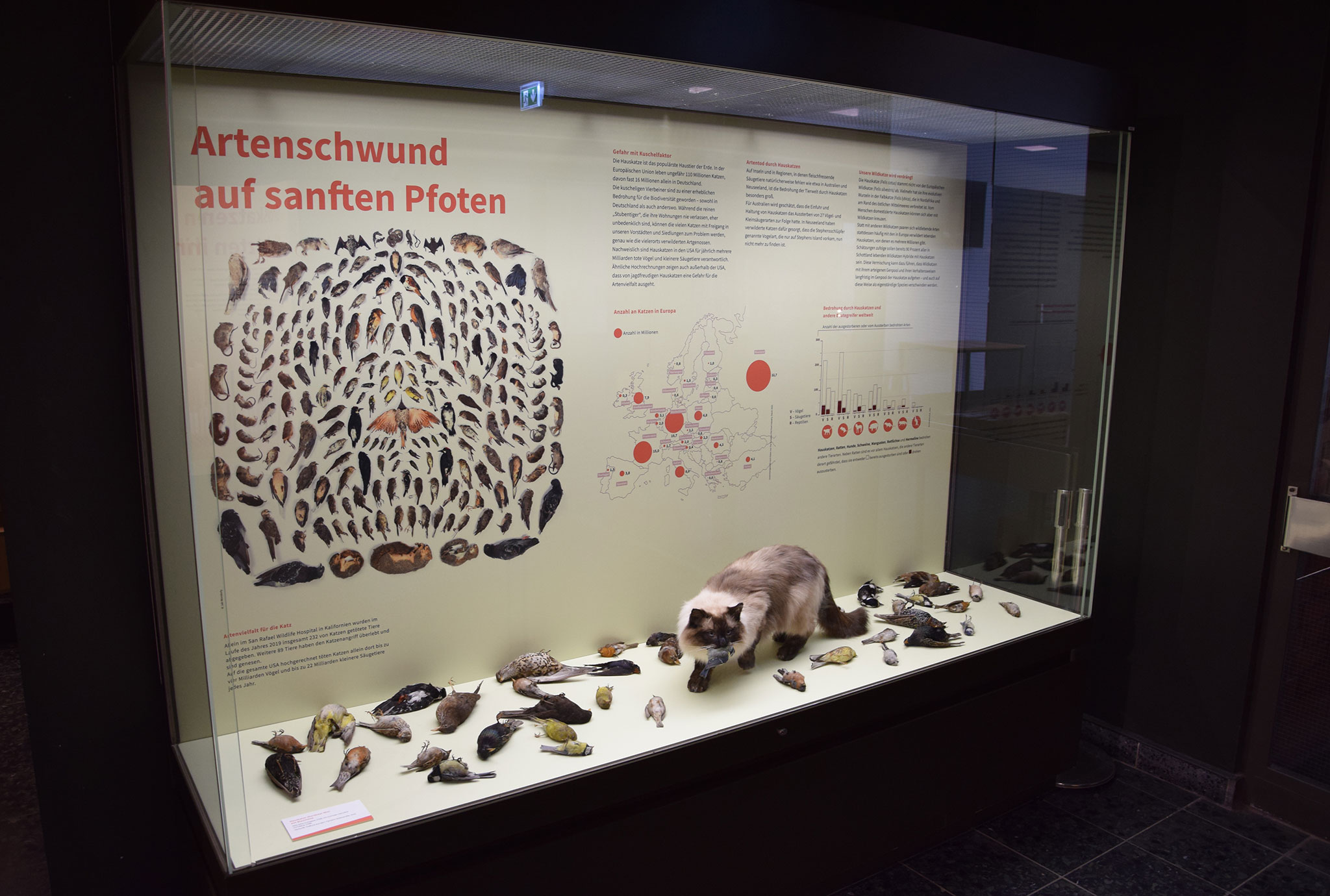 Cuddly pet and predator at the same time: The domestic cat is the most popular pet on earth and is spreading more and more. At the same time, domestic cats are a great danger to birds and small mammals in gardens and in nature. © LIB, Steinkröger

Tiger, jaguar, puma and co.: newly designed showcases and display boards at the Museum der Natur Hamburg provide insights into the endangered lives and special features of the so-called big cats. An eye-catcher is a much-loved “cuddly toy” that is staged here as a bird-eating predator: the domestic cat.

The expressive cats of prey have always been the centre of attraction at the exhibition. The mighty Siberian tiger, the rare and hardly explored snow leopard and the strikingly marked clouded leopard captivate with their beauty. But almost all the big cats are suffering from both dwindling numbers and an increasing fragmentation of their habitats. Too few reproductive animals live in a region. Inbreeding and diseases are the consequences.

Similar to lions, leopards and tigers, cheetahs once had a huge range: the fastest land animals on earth occurred from northern Africa across the Arabian Peninsula to India. Today, cheetahs mostly live in highly isolated populations – with a total of barely more than 7,000 animals. Year after year, their numbers continue to shrink.

“Big cats need extensive territories to be able to hunt prey. But when we humans make more and more wilderness available for our lives, the animals are left with too little space,” emphasises Prof. Dr. Matthias Glaubrecht from the LIB. For example, there are hardly more than 80 individuals of the Amur leopard; the South China tiger is now extinct in the wild.

Domestic cats as a threat to other animal species

While big cats are hunted by humans, their small tamed counterparts are spreading and threatening biodiversity. On the one hand, because stray domestic cats could interbreed with wild ones and displace them as an independent species. Secondly, because they are responsible for the death of billions of birds and small mammals.

With an estimated 600 million animals, the domestic cat is the most popular pet on earth. Approximately 110 million cats live in the European Union, almost 16 million of them in Germany alone. This makes us the European country with the most domesticated cats after Russia.

Extrapolated to the entire USA, cats there alone kill up to four billion birds and up to 22 billion smaller mammals every year. For Australia, it is estimated that domestic cats are responsible for the extinction of 27 bird and small mammal species. Glaubrecht: “Apart from rats, it is thus above all domestic cats that threaten other animal species to such an extent that they are either already extinct or threatened with extinction.”

The newly designed display boards provide an insight into the special features of the rare and very reclusive snow leopard. © LIB, Steinkröger
The clouded leopard at the Museum der Natur Hamburg seems to be on the move. Its habitat, the rainforest, is visibly shrinking. © LIB, Steinkröger
A film shows the fascinating course of the fastest land animal on earth. Cheetahs once had a huge range. Now their numbers of barely more than 7000 animals are dwindling year by year. © LIB, Steinkröger
The mighty Siberian tiger has always been an eye-catcher in the exhibition. Now display panels provide insights into the life of this species as well. © LIB, Steinkröger