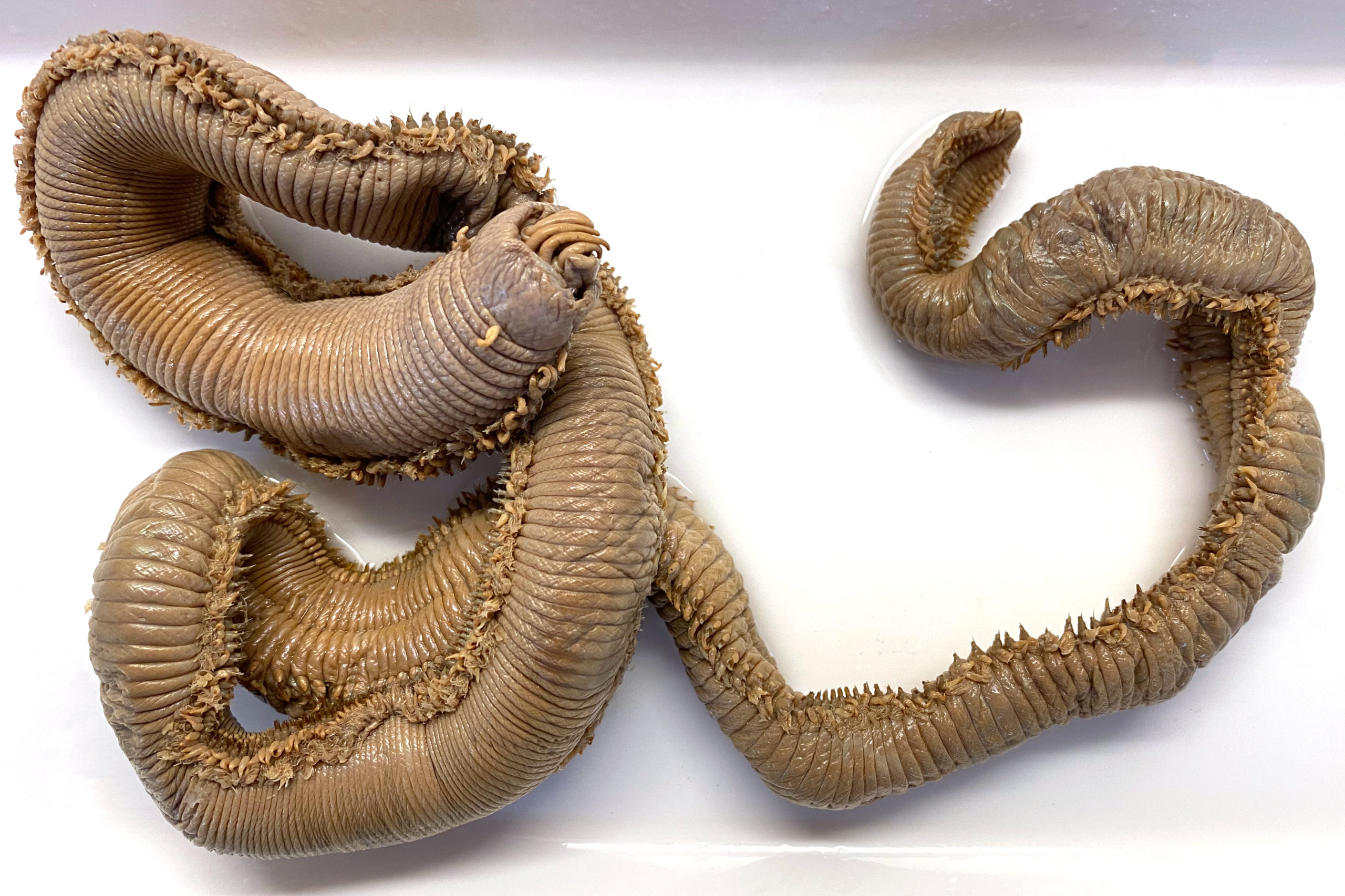 A “sand-striker” from the LIB collection in Hamburg – here outside its glass jar. © Jenna Moore

The enormous, predatory “sand-striker” worm is one of the most famous marine annelids. Videos of this species capturing unsuspecting fish with its fearsome, pincer-like jaws and dragging them beneath the sand have terrified and delighted audiences. Despite the sand-striker’s notoriety, a great mystery remains: how have these marvellous jaws evolved in this species and its relatives?

If the sheer size of the worm Eunice aphroditois is causing you to reconsider your next beach vacation, you might be relieved to know that sand-strikers live only in shallow reef habitats in the Indo-Pacific. Sand-strikers are ambush predators, living most of the time in burrows in the sediment. To hunt, they hold their jaws open at the surface waiting for their prey to swim nearby. Then, like a flash, the worm lunges and grasps its prey with hook-like jaws, and then disappears into its burrow to enjoy its snack. When the worms are not hunting, their jaws are folded away inside their throats. Their jaws are a marvel of evolution—they are complex, composed of several hardened hook- and plate-like elements, which work in concert to capture and ingest their food.

Sand-strikers are only one of more than 1000 species of worms in the annelid order Eunicida. Its relatives come in a wide variety of sizes, ranging from only a few millimetres to the enormous sand-striker, which can grow to more than a metre in length. They also have diverse jaw types, diets, and lifestyles. Some are tiny parasites, others primarily eat plants, and some graze on bacteria and other tiny organisms. While body fossils of soft annelid worms are rarely encountered, fossils of their hard jaw structures (called scolecodonts) are common, and some eunicidan jaw fossils are more than 480 million years old.

The shape of eunicidan jaws is often used by scientists to distinguish species from one another, but there is still much to learn about how these remarkable jaws actually work—or how the different jaw types evolved among major eunicidan lineages. Together with collaborators around the world, Dr. Jenna Moore, head of the Annelida section at the Leibniz Institute for the Analysis of Biodiversity Change (LIB), Hamburg, is studying the jaw evolution and function in this fascinating group of worms with an aim to better understand their relationships and ecological roles in both the past and the present. 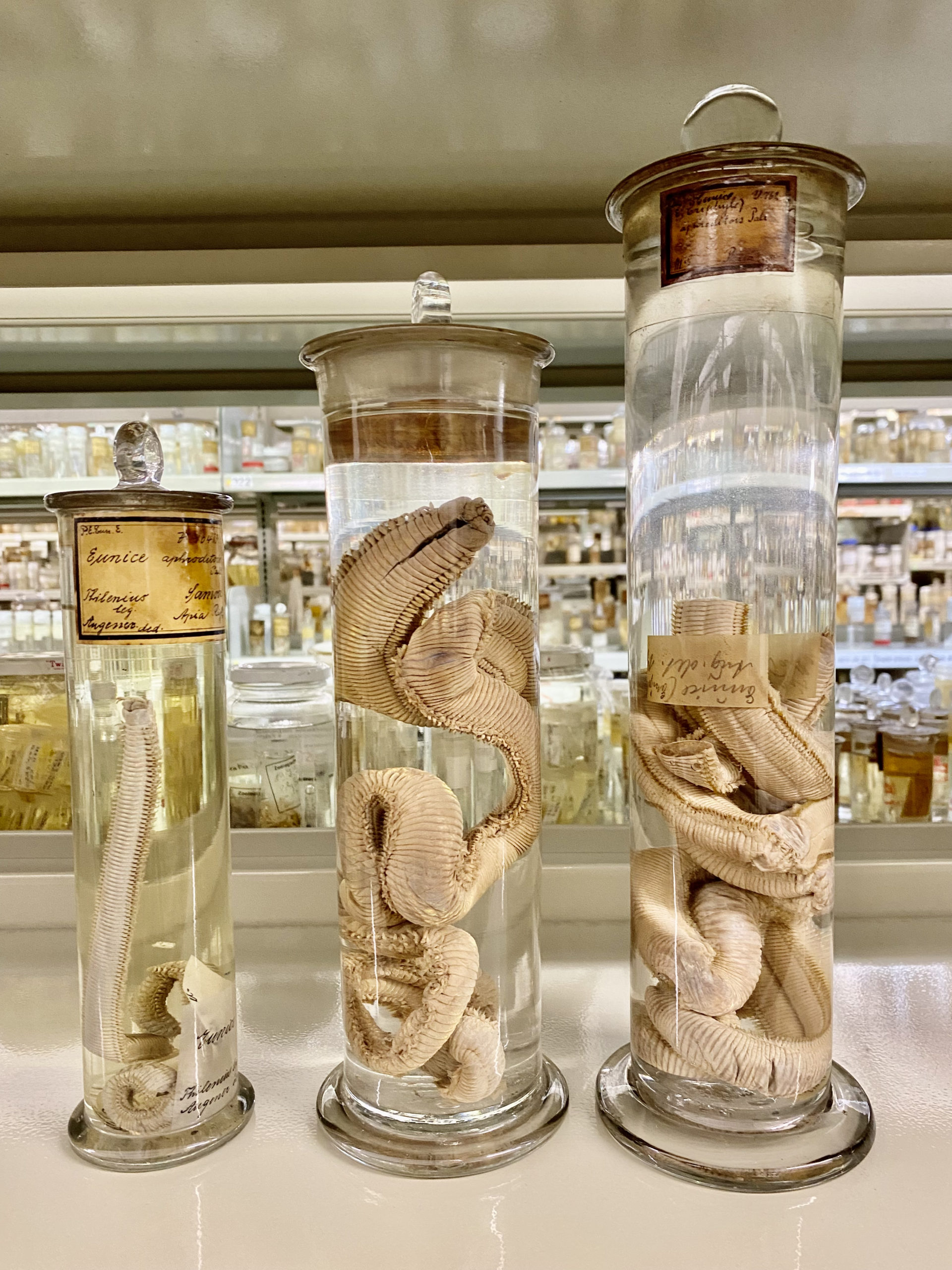 This is how our treasure is stored in the collection: Prepared in alcohol. © Jenna Moore

You may have noticed that the middle specimen of Eunice aphroditois pictured above has been cut open just below its mouth—the mark of a dissection by an earlier researcher. Until recently, this was the only way to study the worms’ jaws, but Jenna Moore and her colleagues are scanning museum specimens using microCT technology to create 3D digital reconstructions of jaw elements and musculature. These images are important to understanding the mechanics of jaw movements and their function in living eunicidans—the next step in the research project. Relating jaw form to function may provide new insights into the ecological roles of extinct eunicidans known only from their fossilized jaws.

The Annelida collection at the LIB is full of treasures such as these. It houses more than 100,000 specimens from all over the world, some collected as early as the 19th century, with a particular strength in deep sea and Antarctic specimens. “It is an ideal collection for studying the evolution of the sand-striker and its relatives, and many more mysteries wait to be uncovered on its shelves.”, says Jenna Moore.

This is what our treasure of the month looks like in the wild: